As usual we have been cooking up a storm in the Alchemic kitchen. Over the past two weeks we have fed at least 425 people, across two events, using surplus food; produce that would have otherwise gone to waste. We take surplus food and either from wholesale or directly from farms, we revalue it then redistribute it. Make it into something delicious and nourishing. That is exactly what we did for the Liverpool City Region Year of the Environment Green Summit earlier this month. We saved a mound of potatoes, a box of corn, the same of cucumbers and much more (read on for exact quantities).

We put together a hearty menu of potato salad with salsa verde, bean houmous with avocado and aubergine, mixed pickled vegetables and harissa spiced pumpkin dahl. This was served with either apple blondies or spent malt granola bars for dessert, which were greatly enjoyed by all including Metro Mayor Steve Rotheram who took to twitter to declare it all ‘delicious’. Neptune Brewery gave us some of their spent malt, which we dried out before adding fruit and a caramel made from surplus pumpkins. Spent malt is a by-product of the brewing process and is one of the largest sources of waste for all breweries. The apples, which were gleaned by a team of volunteers at Speke Hall’s orchard, are ordinarily left to fall on the ground. To accompany the savoury lunch boxes, we served focaccia produced by the fabulous team at Homebaked Anfield. As well as supporting a local social enterprise, which we firmly believe in, the bread was amazing so an all-round success. We whole-heartedly agree with Homebaked Anfield when they say “ours is a fab partnership, supporting each other in many different ways”. We continued the collaborative theme with the Green Guild of Students from the University of Liverpool supporting us with volunteers on the day, and taking all the food residue and Vegware containers to put through their Rocket Composter. 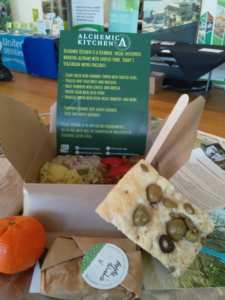 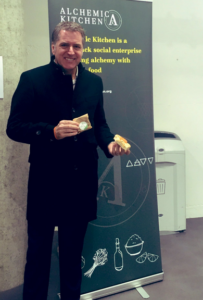 In total we saved; 10 kilos of spent malt, 32 kilos of pumpkin, 40 apples, 12 avocados, 8 kilos carrots, 35 kilos of potatoes, 10 kilos of parsnips, 3 kilos of fresh chillies, 14 aubergines, 12 bunches of fresh herbs, 12 celeriac, 12 cucumbers, 15 corn on the cob and 10 celery heads. The produce that was donated to us that wasn’t included in our menu for the Green Summit is being made into preserves, pickles and ferments to form our online shop offering. Shop here.